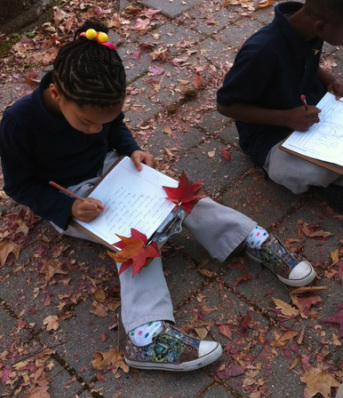 America’s Choice at SAND School is a K-8 school in Hartford, CT. This urban school has seen an increase in its population of English Language Learners. In writing, ELLs will struggle with the development of cohesive and descriptive narratives during Writers Workshop because of their limited English vocabulary.

The goal of this action research was to further strengthen the writing skills of all students, especially ELLs, through the integration of a 6-week cartoon genre study unit into the Writers Workshop. This cartoon genre study was supported through the use of 9 student iPads and the Toontastic application developed by Launchpad Toys. 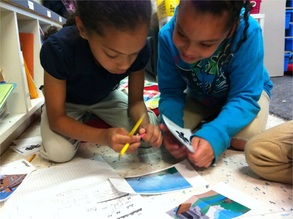 Students began a 6-week genre study about cartoons. Using Toontastic and the sharing site Toon Tube, students began the unit watching exemplar cartoons made by other Toontastic users. Students analyzed the cartoons and co-created a rubric in order to define an exemplar cartoon. This allowed all students, especially the ELLs to see the exact expectations required of them in this genre. By giving students clear expectations, they are able to control the success of their final product.

In order to activate prior background knowledge, students compared their cartoon rubric to the rubric they developed during their prior narrative genre study. Because learning is based on establishing neural connections and drawing on previous experiences, building background knowledge would support students in this new genre. By taking the time to compare the two genres, students were able to determine that cartoons, like successful narratives follow a similar structure. Both use characters and settings to draw audiences into the action, then they have a conflict that continues to hold the audience captive, and finally there is a conclusion or resolution.  Therefore, we spent several mini-lessons reviewing these plot structures as they related to cartoons. Students also helped to revise the traditional writing process in order to relate it to the directing process. Finally, several mini-lessons and workshop periods were set -side for students to learn how to navigate and successful use Toontastic.

Once students, had the foundational knowledge and skills necessary to be successful with Toontastic we were able to break up into cooperative writing groups to begin the process of creating cartoons. Cooperative writing groups were used for two reasons: First, students at this point in the year were eager to work with each other and secondly, social interaction would allow students to try out ideas, summarize, and get immediate feedback on what others think. This social interaction would also serve as a support for ELL students develop oral language though meaningful conversations with peers. Students were able to self-select their cartoon groups, with two students choosing to work independently. Over the rest of the unit, students followed the Writers Workshop rituals and routines we had developed at the beginning of the school year. This included mini-lessons centered on problems I had noticed during writing (directing) conferences and other observations; response groups with peer writers; writing conferences with me; and author’s chair where work that was completed during the work period was shared and celebrated.

During the work period portion of the Writers Workshop, students went through their revised directing process. A heavy focus was given to the planning process because of the large number of ELL students in the class. Students used the same graphic organizer they had relied on in the previous narrative genre study and were able to use setting and character cards downloaded and printed on the Toontastic website. Using these props, students were able to once again engage in meaningful conversations and increase their oral language skills.

After the planning process, students were given two choices for the “writing” of their cartoon. Students could either choose to write a script or use the props to orally tell their story. This option was given in order to differentiate and meet the abilities of all students. Despite which option students selected they were still expected to practice their cartoon orally in front of a response group of peers. In Writers Workshop, peer response groups are used to give feedback. Once students received feedback from their response group, they were expected to go back and make revisions to their plan.

After students were comfortable with their cartoon, they were then able to use an iPad to create their cartoon on Toontastic. The open nature of the iPad allowed for cartoon groups to continue working cooperatively, without the fear of one student monopolizing the iPad. It was interesting to see students working to each other strengths. Other groups to draw original characters and settings often borrowed the students that were viewed as good artist. The same would occur with students who could make different sound effects. Often students’ problem solving skills would come into play when they encountered difficulty with the Toontastic application or if they were not sure how to do something with the application. During these moments students, were encouraged to seek out help from peers before coming to me for assistance.

Data and Next Steps